If I could offer you one tip for the future, sun-screen would be it. The long term benefits of sun-screen have been proved by scientists, whereas the rest of my [writing] has no basis more reliable than my own meandering experience. Slowly but surely the edifice is semi-rebuilt and I end up feeling not a little sheepish.

There have been ructions: [Redacted stuff about my father].
The race is long and, in the end, it's only with yourself.

The HDD came back unmolested, no problems, they scanned for the malware and found nothing and so looked no further. My laptop has the malware and, though I told them I needed no data from it, they've sent it away to save the data. This data is mainly student work downloaded from online storage so I absolutely don't need any of it. Oh well, they were trying to do right by me, I just wish they hadn't! I'm on a loaner laptop, about twenty years old but at least it works.

The tooth has been seen. Temporary filling applied, I'm suspicious of it and eating on the other side of my mouth, but at least it no longer aches. I have an appointment to get a proper filling in November. Apparently it was the filling that failed, not the tooth, and it took the side of the tooth with it when it went. It was a decade old I guess. And, at the same time, the blister is slowly healing. I've been able to walk rather than hobble for a couple of days: hurrah!

On Thursday I had a chat with Miss Warrington. I have been getting steadily more excited about the new Matrix film now that I have had explained to me precisely how the first film (and, indeed, the sequels) are, in fact, a trans allegory. It's... well, it's kind of obvious now I look at it (surface level: living in a world where things seem off but not knowing why; the red pill is oestrogen; Trinity is filmed to be attractive to lesbians. Going deeper: the relationship twixt Neo and Trinity is not a hetero one at all; the posters merge Trinity and Neo's face a lot; Cypher was supposed to be a woman outside the Matrix and a man in it - hence the conversation with the Agent, it's transition regret - there's more, but that'll do for now). But, that aside, I really enjoyed the first film (and then buried how much I liked the follow ups in the welter of bad press) and the trailer reminded me about how much I enjoyed it. I mean, I was friends with a bunch of sci-fi geeks when the first one came out and went to see it with them at a Film Society showing for the first time. We discussed it a bit, you might say, and of course I played with the idea of being in the Matrix but being a woman in a pod with a male avatar - because of course I did and I read the fanfic that did that different ways. Been using scenes for my whole career (the fight and jump program scenes) with Sixth Formers after their first essay: "everybody falls the first time".

Anyway, Miss Warrington was also talking about the trailer and on Thursday we were able to have an actual chat at the end of the day. Her day off is Friday this year. She took the first half hour to talk about Her week and the students She was teaching, how Her lessons were going, Her recent switch to more colourful and playful clothing. And then we talked about the film a bit (Her dress had white rabbits on it, as did Her earrings). Then She asked after me. I didn't mean to, but I shared the reason for the blister - She laughed, called me a glutton for punishment, but then made some recommendations for shoes. Alas, we got no further as we were interrupted by Alice and thus segued back into the Matrix until Alice started talking shop and I took my leave. Daughter to Dance, then shopping, missing my usual Thursday night gaming session (I only got home at 2145).

Wore the pink accented glasses to work every day but Thursday (went with blue to match the tie, but it didn't feel right, so went back to pink), and my bralette on Thursday and Friday. Got changed into my flares most nights, been in my nightie and stuffed bra every night apart from Tuesday and last night (goodness, I wasn't prepared for how much of a part of my routine that has become) and... Yeah. Leaned into the whole Mx thing and I do feel soooo much better than I usually do at work. My hair is now long enough that I can do a high ponytail to keep it dry when not washing it. I... I like that. And even when it's unbrushed and messy I feel like I'm looking at myself in the mirror of a morning. With everything, that has been a real tonic. I even had a chat with a female colleague who doesn't know about how to straighten hair (or at least avoid the strange kick-back I'm developing) that went... well, rather well actually.

All this time wasted - since at least the early 1990s - knowing that something was just... off. And, also, kind of knowing what it was that was off too, but not wanting to know because of the feeling that it was somehow wrong. But, I know now. As in, I know in a way that doesn't allow for plausible deniability. And the clock is ticking. Or not. Not sure my father would be supportive were I to tell him what I now know. A conversation back in London where he and my brother agreed that trans people were "looking for attention" and that "God doesn't make mistakes" so therefore "trans people don't really exist" because they're just obnoxious potential perverts desperately seeking attention. My father has regularly suggested that I just "give up" cross-dressing and still believes that this makes me to blame for my divorce as it puts him "in danger of supporting" Tilly over me. Maybe a different clock is ticking. Certainly next Sunday isn't the time to tell him. If there will ever be a time.

In all of this, I have never thought of myself as being in the wrong body. It's mine. Baz Luhrmann told me how it was the most perfect instrument I would ever know. It's hairier than I wanted in places that I didn't want hair but that sort of thing can be solved without changing my body or even who I am. And it didn't do some of the things that... well, I knew it wouldn't do (I'd read the Body Book) but still kinda hoped that maybe it would - like a mistake had been made in the admin when I was born or something, you know? Like, maybe I'd be lucky enough to have gynecomastia? I wasn't. And, I'm off on a tangent.

But trust me on the sun-screen. 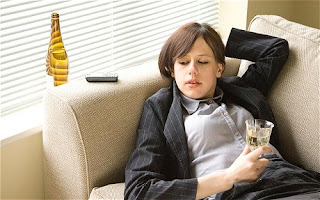