Yesterday rather got away from me. So, two parts to this post.

Part One: Getting there

The car was due back in to be washed after the day before and I was still in a bit of a tizz about my internal monologue, so I resolved that I would be better. First of all, I wore a pair of glasses and an alice band when I dropped the car off, which went unremarked upon by anyone. Then I went to the supermarket to see if I could get some make-up for cheap. I did, mascara, but a reasonable one this time rather than the rather poor one I bought... in 2013? Possibly. Anyway, yes, some mascara.

Picking the car up, thence to the city centre again, parking a place that the Boy and I found. The idea was that I could use this that evening to go to Pokemon. At this point I was concurrently planning a night at home dressed and a night out playing Pokemon - there was no decision to mix the two. I had resolved to inquire after some make up tutorial in the department store, but I didn't in the end (prices started at £50 for 30 mins, I don't have those kind of funds). However, I did get myself a bag for tights and bras for the washing machine. Then I went and got some shampoo from the refill shop - the real reason for going back into the centre of the city. I also got two more alice bands.

By now I was toying with the idea of going to my favourite vegan game cafe en femme and was wondering if I ought to pop in in person to discuss. But I bottled it and instead went home for lunch - where I changed into my en femme outfit and wrestled whilst having pizza. I messaged the cafe, got a positive response (I had accidentally 'outed' myself a while back when making an order and the computer auto-filled with my Joanna account - I've been enjoying deliveries addressed to 'Joanna Cole' as a bit of gender euphoria recently) and then wondered if I would actually go through with it.

At around half five I sneaked out to the car dressed - if not now, then never, right?

Somehow I got away with driving past some boys from up my road, I suspect the glasses, hair band and dress just coded 'woman' to them. I mean, I was wearing a face mask as well - but I ditched that relatively quickly. Then it was just a matter of working out where I was going to park and if I was actually going to go through with it. My ankles were protesting a bit with my 3" wedges, so I opted against the earlier parking spot and went with the closer one by the bus station. Meaning I would have to walk through there.

Head down, quick pace, face mask - what else could I do? Someone asked for change, I went to respond - he sniggered when he saw me properly, couldn't have heard my voice, I kept going. My mantra, had been since getting in the car: "If you're not a tit, no one gives a shit". I don't know if anyone else clocked me in the bus station because I wasn't looking, I kept my head down and my pace as quick as I could manage.

Into the cafe. Someone I know there was also waiting by the till to pay for the evening, they have ASD too, and though he was clearly trying to place who I was it was obvious that he did not succeed. He gave up and wandered off. I paid, the assistant was lovely - they either knew or they didn't, either way, they were welcoming and effusive, softly spoken. They definitely knew I was en femme even if they didn't know who I was. Until I paid, then they knew. They did not react. Ah, so they knew. I was largely left alone after that. I reached out to the transwoman member of the group, sat with her for a while saying nothing - she had clocked I was not a woman, but took a while to work out who I was - though she did work it out relatively quickly. So much for being unobtrusive. Then one of the owners (I think?) who I had messaged came and sat with us and just chewed the fat as they were on a break. Another regular joined us, chat was had, and it was just chat. Nice chat.

The tournament began. I was invited to sit with a small group, again - they clocked me almost instantly, but they were friendly and polite. I think I know one of them from when I usually go, but she didn't seem to recognise me. And... that was it. I played five games, with different people, three of whom I have met before. Hard to say if any of them connected the person they played against with the person they knew. They absolutely knew they were playing someone en femme.

Part Two: Getting away

Last night I managed to wash the mascara off reasonably easily. I'd had an iced coffee at lunch. The caffeine kept me going, and prevented sleep along with the nervous energy of going out. So why did I do it?

I predicted shame last night. It has not arrived. I woke this morning with a feeling of almost relief. The world had not ended. People were polite. People were nice to me. No more or less than usual, mind, but I was made to feel welcome and comfortable by the person I messaged in advance and by the transwoman member of the group. The former had messaged to check I was alright overnight. I had slept in my nightie and bra and had reasonably good dreams. I was... content?

That's the thing - if the Rubicon has truly been crossed as posts have asserted then this was just a matter of time. If not now, then when? Sure, the disguise will have to be re-donned in the future but if this place means anything then it means that action must follow realisation. Authenticity and honesty are why this place was even created in the first place - it follows that steps like this must be taken at some point. Maybe it could have waited for the hair to be longer, for the make-up game to be more effective (more than just mascara) and for the dress-code to be better chosen rather than almost default in fear.

I have long said here: I am fooling nobody when I dress. I am a man in a dress. No matter what else changes I rather suspect that I shall remain such, so getting used to being 'clocked' is going to be something that has to happen.

The whole day was spent in glasses too - like, the whole day. From immediately following shower (and beforehand from getting up) to finally going to bed sometime after midnight. That's certainly a thing. Today has not been the same but changed into my V-neck and black denim skirt for the day. Done some weeding, even risked taking the bin bag out.

What was I expecting? I don't know. I was so busy wrestling with the practicalities of making it happen that I didn't actually think about why I was doing it in the first place, let alone working out what the projected outcomes were. Maybe it was, in part, an attempt to banish the demons evoked on the Monday during that walk around the city centre. Maybe it was to do with the fact that I tend to jump into water with both feet in the trained method for not knowing the depth of the water whilst being ready to swim. In the face of the unknown I tend to rush into it headlong - nothing ventured nothing gained, right? At primary school we went ghyll scrambling on an out-of-bound centre trip - the first day. The guide asked for volunteers to throw themselves off the edge of a waterfall to the plunge pool far below - no idea how far, maybe ten metres - and no one came forward. Flabberghasted, as I was waiting for someone else to go first, I put myself forward and just... did it. Ruined my socks and trousers beyond repair, unable to wash the water from my skin (it felt like) for the rest of the trip. Two others followed. When we went caving later in the trip I was the only volunteer to go through 'Thistle Cave' - a hole only big enough for ten year olds to get through, no guide would be with me and none would wait at the other end. I was left to it. And I just... did it. 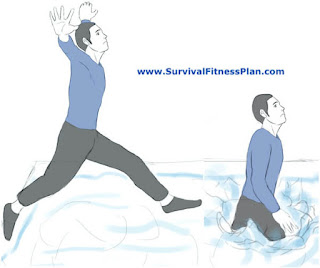 This put me in mind of that. No one else was volunteering for me to build up slowly - my mother does not think I am trans and feels that I am doing things because I feel I have to rather than because I finally feel that I can, there's no chance of showing her me dressed. Miss Warrington is a work colleague so... no, unprofessional. Catherine? Bit exploitative as I haven't really managed to keep in touch all these years. And that's it IRL I think. I looked down at the plunge pool, the guide said it was safe, and thought: if not me, then who? If not now, then when? I took a breath, a step, then jumped.

Was I foolhardy? Almost certainly.

No, the real impact will be assessed next week. Then how badly damaged the socks and trousers are can be known - perhaps they will never again be usable. It may be worse. Maybe I will turn the wrong way in the cave system and find myself lost underground.  Hope the experience is worth it.