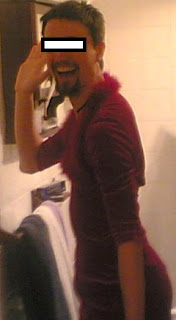 A long time ago now I posted my favourite photo of myself over at Stana's Femulate blog. It is of me but it was the time I first cross-dressed in company of friends at Catherine's house, I had a beard (I still do) as my job requires me to don a persona and that persona includes a beard. This was the year I would meet Tilly but it wasn't yet that time. In the ensuing discussion there was a comment that someone hoped that I hadn't gone out like that as keeping a beard brought all TVs into disrepute. I recall being semi-shocked at that comment but responding carefully that, no, of course I hadbn't gone out. Clearly the intention hadn't been to pass. I was also ashamed that someone thought I had brought the community into disrepute. I wasn't a proper member of the trans* community, I was the reason that the rest of the world hated us.

And, sure enough, the version to the left here is carefully adjusted to make it hard to search for so I bought into that at some point. I have posted the full image more recently on the blog. But this fed into a feeling that I have long had - that as a representative of a community I must be very careful how I present. It was part of my Christian identification (why I don't ever show my allegiance visually with things on my car or in my clothing) and also as a teacher in public. Furthermore, following December 2017 and my diagnosis as ASD, I have been very conscious of the fact that I represent the ASD community and I have to be very careful what I say or do as people tend to generalise from me. It is fear. And shame. 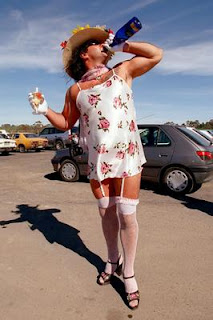 That was a long time ago. But the wounds run deep and I still have problems thinking of myself as a fully paid up member of the trans* community. My disguise is deep, my outward affectations keep me mostly safe. Even my masking is generally good enough that I pass as NT most of the time and people don't always know that I have ASD. Close enough to normal people to gain the advantages but just far enough to put people on edge, to come across as in the uncanny valley, so that I am always on the verge of being 'found out' and punished because people know that there is something just not quite right about me and the way in which I behave. Which is a feedback loop. And, because I do things that are... not in the mainstream, I end up having something to hide - not what people expect me to be hiding and nothing they would 'discover' but enough... Tilly thought she had found it with my cross-dressing, my old Head of Department thought he'd found it with... something. I never did figure out what. My current work thought they'd found it when they demanded unreasonable amounts of change (my compromise wasn't enough but when proposed by my replacement it was not only enough but heaped with praise as the magic solution).

I just thought that maybe the ContraPoints video would be relevant to our interests (and I'm sure you've seen it already and have opinions about it - I have only recently become aware of the channel and the video above was something I only watched last night) and the music video is from 2011(!) and I only found it last night as well but I have no idea how. I might be slightly obsessed with it.

I had a better post planned, honest, but it all got hijacked last night.

Anyway, yes, the juxtaposition of the song lyrics, the ContraPoints video and the memories of the feelings of shame that continue to swirl around me like the waves on the sea between the Hunter's Cabin and the Pale City in Little Nightmares II (I can do pop-culture references) were enough to prompt me to make links and then place them before you here.

Once, at Skegness, I was part of Spring Harvest - a UK Christian festival where I got to help sell books. I attended a lecture by a Dr Carson where he spoke on a Christian response to depression and mental illness, not long out of University myself (maybe still at it, I can't rightly remember) I knew that I was at least within flirting distance to touch depression on the arm in conversation and smell their hair. So I obviously listened carefully to the advice - to the admonition that to feel depression was to think of yourself as better than others as you were holding yourself to a higher standard - the concept that depression was actually a sin of pride. That it was something that needed to be forgiven and the inverse of what I had assumed it was. Maybe that works for some people, but now I know that I am ASD and I wasn't convinced, I was scared and it did make me feel even more ashamed and guilty - who was I to judge myself as better than others? But then, and now, I'm not sure that's right.

My self-loathing was deepened by that talk, and the subsequent purchase of his book and reading of it on the subject of depression. I resolved that not only was I not depressed but, if I was, I would simply reject it and hide it. Which I did. Ah, it must have been before my first stint in the big city where I would eventually live with Tilly because I recall that being a fuelling factor to give up masturbation (to prove it did not rule me and I could if I wanted to). I did, by the way, eight months if memory serves. So what? It laid the foundations or softened the soil or something for that remark over on Stana's blog. I have long considered myself to be a poor example of whatever it is that I represent and even though I haven't shaken that feeling very much, I do feel that I understand it a little more.

I can't watch farce comedy like Fawlty Towers or Clockwork or things like Allo Allo because it is farce, as I used to put it: all of the misunderstandings could be solved if the people involved just said something at the right moment. The fact that they often choose not to solve the misunderstandings, the only explanation for them not doing so, made them maddening for me to watch. The cringe factor was so large and difficult to handle - I felt the embarrassment that the characters did not - that I often had to leave the room. Even now I struggle, I was watching Quantum Leap on my own recently (Series 2, episode 3) and I had to turn it off and go for a walk.

I haven't had a haircut since September 2020 and now knickers are my standard underwear. Every now and again I wear tights because they are comfortable and my legs are finally in need of shaving again. I'm reading books again, having read two (two) in the last month.

Too many links, too late at night, I'm going to go and stew a little more... 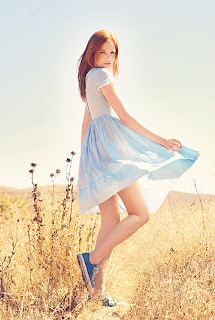 Posted by Joanna Cole at 1:53 pm No comments: