I should start out by warning you that this is one of those awful TMI posts. That means some musing on stuff that lots of people don't want to know about.


It's also been a while and so I guess an update is in order.


The world has gone mad, officially. I have been warning in my lessons that the world was heading this way for years and I warned that some things would start to happen as a result. Since making those warnings I have discovered a whole new realm of people that stand to lose a tremendous amount from what I now believe is to come. I may even be part of that group, though my camouflage of privilege may be enough to protect me for the most part. Well, at least until I am inevitably unmasked by the rather terrifying Investigatory Powers Act that was passed into UK law recently that essentially removes even the fig leaf of protection of privacy online. We live in a world where youtube will pull videos with swearing on them, where Facebook will chuck you off for posting breastfeeding pictures but rape videos and trolling videos and info-graphics on how to sexually abuse and assault people are apparently protected under freedom of speech. Where odious men can boast from a gold plated elevator about how they have stood for working men everywhere to take on the establishment and the elites. Where to worry about those different from yourself is to be part of a metropolitan bubble, apparently - I have never been metropolitan.


And I do nothing. Like I have often worried on here, I am a coward. A total coward. Safe enough in my layers and wrappings of privilege to be able to function and carry on as before. I have a job that is moderately protected, my house is unlikely to be removed and my pay is pretty much in place. My family fulfil the norms and expectations of the privileged position that I occupy in society and, for the most part, I am a rule keeper rather than a rule breaker.


My feminine wardrobe remains inaccessible on top of the wardrobe itself, now the only real storage with my stuff in it but the shelves on which my books stand to be judged by visiting intellectuals. Even discoveries of old CDs fits the milieu being those from the days I liked CCM and, to be fair, it is good music with good soul in it. I wear suits, I play the game and know what I am doing. I manipulate and lie to my charges as I do in every walk of life: that their exams mean something, that they need to work harder (or less) to gain results; that results are not them but they are what they are worth and they are what is important. They must learn, they must listen, they must conform and, above all, they must never question the hierarchy of society or their role within it. Because that is what I do. Whilst I can, and do, point out the flaws my position bids me keep things the way they are and I can claim all manner of mitigating factors but I fail to act as Jesus would have acted. That revolutionary who listened and broke bread with those who needed him, not those that wanted his preaching, the one that came to those who would change and who needed sympathy and compassion and charity. Exactly the sort of people that need us, all of us, even more than ever.


But I am a coward and I do nothing.

It has begun. It is all around us. And I, for one, am scared.


There are less political problems. I see tipping points passed and publicised by people who know better than I what the facts and the stats all mean. I see the sea ice retreating in a feedback loop, I see the increased activity of methane fountains and the slapping of carbon taxes on the means by which we tell ourselves we can save the world. I see and hear the debate, for apparently it is one, about the raw facts that tell a compelling and dangerous story. And I see intelligent people, who should know better, arguing that things aren't that bad - not with their word but with their actions and their choices in life. I see my own family expanding as the world grows ever more precarious and dangerous and as the climate rallies round to change the future in ways that were impossible to imagine just five years ago when I started this blog. Here I have no privilege but to live where I do, at the height I do in the country I do. Rising seas will not affect me directly. Most of the food I eat is from sources that will not be affected immediately nor for some time. There is a good possibility that I could live to my 60s and not see the effects of what is already happening affect me directly. Or, at least, until my children leave home. Things are already changing and I am not certain about anything. And I sit and blog. About CDs, about sex.

I don't remember much specific or useful from my childhood. But I remember playing stuff with my father and mother. I remember board games, sing-songs in the car, stupid family games and puzzles, reading together on a weekend in different chairs, being lost in books. I remember extended periods alone playing in my room too and plenty of less wholesome stuff. However there was a balance and, I would argue, my home life was pretty positive even during their divorce.

With a third child, likely a boy, on the way I find myself assessing my current parenting standard a little more critically than normal. I find that I don't really play with either of my children. As a family we don't do sing-songs, Tilly has long since quashed my usual singing instincts. Let me explain, I can't sing. At all. I have long been embarrassed about this. Tilly just happened to confirm something I long suspected, my singing is not a thing that brings or sustains joy, rather it is something that is atonal and bloody annoying. So it is that we do not sing in the car on long journeys nor do I sing or even play music in the house as it is often considered too loud or just plain annoying. My children will never sing with me as I sang with my parents.

As I increasingly learn about Asperger's (now simply ASD) and what boxes in it that I tick, I understand more on how I can't do what my father did regarding joining in games. But opportunities to play board games are slim. We have recently started playing Settlers of Catan. Well, I say we, Tilly has played it with the children. We do not play as a family. I play chess and the Viking game (Hnefletafl) with the Boy but the problem is that these are complex games and he is still young. Like when I played chess with my father and he always played to win (and thus usually won) the experience is not altogether positive for the Boy. He will play but then there are long fallow periods where he doesn't and I can respect that. As a child I was a very poor loser indeed, my mother often won family board games, her own autistic superpower, and liked to win. So, yeah, I became a bad loser. I got that from my father. I am keen not to pass that on to my children and they both tend to be okay with the losing, but we don't play games often as a result. Or they play with Tilly because she can actually play with them rather than against them.

I'm not a good listener either. As both my children have the Asperger's quality of wittering endlessly and without pause on something in their head we often end up at impasse - they can't work around their issues and I am often unwilling enough to let that stand.

To realise I am but a poor shadow of my parents is... saddening.

Then there is the sex stuff. Now, obviously, based on past experience I am not going to expect Tilly to do anything even remotely physical or sexual. And I am largely correct. There is some hugging. But mostly she hides the fact that she feels sick all the time and is less craptacular in my direction than she was the last two times, which is nice. Hard for her, mind, very hard for her. I do not help as I do tend to get in a loop with jokes and phrases when she's trying to be direct and quick. Also, I forget things because I didn't hear them properly the first time or I discard them because it's not something I need in the moment I learn it. In short, I am a bit shit and infuriating and annoying and irritating in so many different measures I can't even keep them all in check.

When reading about sexual things, then, I often try to cast the antagonists in my fantasies and, well, as ever, I know that Tilly would never take the role. And that means I cannot even fantasise about her taking the role. So I don't. Inevitably Toby takes that role instead, which is not great, because she was mad. And I worry about conditioning. So, why do it? Because I am a bit crap at not doing it. Masturbation being very much my thang since I worked through the religious arguments and decided that God probably doesn't care about it unless it leads to issues via conditioning. Besides, it can help in other ways such as lowering stress and whatnot.

And that's all I have at the moment. Just musings. No answers. 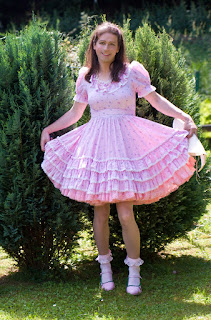