I made the mistake of propping myself up with coffee yesterday. A late night in front of the computer reading shit on sites I really ought not to visit but I do because it gives me a chance to pleasure myself a bit. I am being supremely selfish, I know this, because I am attempting to use time for my own sexual gratification. We ordered some Chinese food and we ate together in virtual silence whilst Tilly researched for her book and wrote with her writing buddy last night. I had an early night, leaving for bed around 10pm. I don't remember Tilly coming to bed. On Thursday night I stayed up until gone midnight, Tilly had worked until 11pm, because I wanted to visit GetDare and look at some captions and fantasise about actually carrying out a faproulette (look 'em up).

I was shattered the following day, of course, and I ended up having a coffee so that I was awake enough to do my job and lead a meeting on standardised test scoring. I actually take a glee in the latter because it appeals to my personality. But one of my staff is going to need more support than I had initially thought was needed. It's going to test my ability to be organised, clear and forceful. Anyway, I went to the pub, had some Pepsi, and ended up being too wired when I came home. Tilly worked. At no point this week have I thus managed to get up early enough to repeat my dressing on Monday - the high point of the week actually - which is a shame.

She's feeling better. She had another wine. But not well. Dull, continuous pain. She has a cold coming on. She's started her book. Her and her writing buddy, let's call her Carol, are planning a novel now. Carol is coming to visit later this month and again in February to plan properly. That's cool, I have friends over from time to time. But it fills me with dread. It's another thing that comes before me. There, I've said it, the selfishness is out. Most things come before having any kind of intimacy with me. You'd think I'd be used to it by now. Tilly has been run down and 'not up' for sex since 2007. And I don't actually finish my job in sex anyway, haven't since we conceived the Boy. I mean, I can, and do sometimes, but it takes a lot of work. It's no fun for Tilly.

I think I may be giving up on this, by degrees.

Is it me? Time and again on here I have written that I'm 'not a catch'. Perhaps it is. I'm not enticing her enough, I can't make romance work and I'm just not worth having sexual feelings for. I am not wanted. Not like that. She's fond of me, but, to Tilly, I am just like an extra child - and one from a different marriage rather than one of Tilly's own. Or I'm like a sibling or something. I don't know, I didn't (and don't) really get on with my brother or cousins so I have no basis for comparison.

And I end up wondering - has anyone ever been attracted to me rather than what I represent? My first relationship was her's to, she was attracted to my availability and politeness - my gentleness - but we weren't going anywhere. I was a safe start in romantic life. Good enough. My second, Toby, was attracted to my apparent straight-laced qualities coupled with the strangeness of my cross-dressing desires and understanding. The apparent strength of my faith. Once she got to know me, she was less enamoured. Tilly? I have no idea what she saw in me. It wasn't me.

The tags explain what's after the line break.


It was a dream I had sometime this week. I bought Toby a collar, she always wanted to be collared and made to be a cat, so, in the dream, I indulged. I forced her into it (metal, locking) and she was happy with it. We played with it and I took her to a club on a leash, made her sit on the lap of a gay guy who wasn't interested in her, so that she could be petted and ignored, just like she wanted. At the end of the evening I led her back to her place. It was a holiday or something, there was no work for me any time soon, and so I was staying over. I promised her the key in the morning and thought I'd hidden it well.

Obviously, being me, I fell asleep at some point. She didn't. She found the key, reattached the collar on me and revealed her treat for me in return - a chastity device. She woke me up and we went out to the field, I've mentioned it before, but this time she didn't just handcuff me to the fence, she attached the chastity device and leashed the collar, also locked on, to the branch instead of the handcuffs. Then she put her glasses on me. I was left alone.

Having to look at the world through glasses, and my eyes having to adjust, meant that by the end of the night I was acclimatised to them. I stayed there another day. She fetched me in the evening and led me back to her place. There she made me keep the glasses on, but did not remove the collar or the chastity device. I was freed from the handcuffs and dressed in my normal clothes. We drove to my place, I drove of course, and went in. We watched a movie and I fell asleep. In the morning, closer to lunch, I wake to find Toby gone. The collar is locked on, the glasses are off and now I'm totally short sighted. I'm still in chastity. After some fumbling I find the glasses, put them on, and there's a note.

She's not coming back. The keys are hidden outside my flat somewhere. And that's it. The end.

I woke up at that point. It seems that even in my fantasies I'm to be rejected these days. The interesting thing to note here is that there's no rhyme or reason to it - it's a fairly obvious portrayal of how I feel at the moment. Except that there was more sexually related fun in the dream than in real life.

I think this hits pretty close to home at the moment: 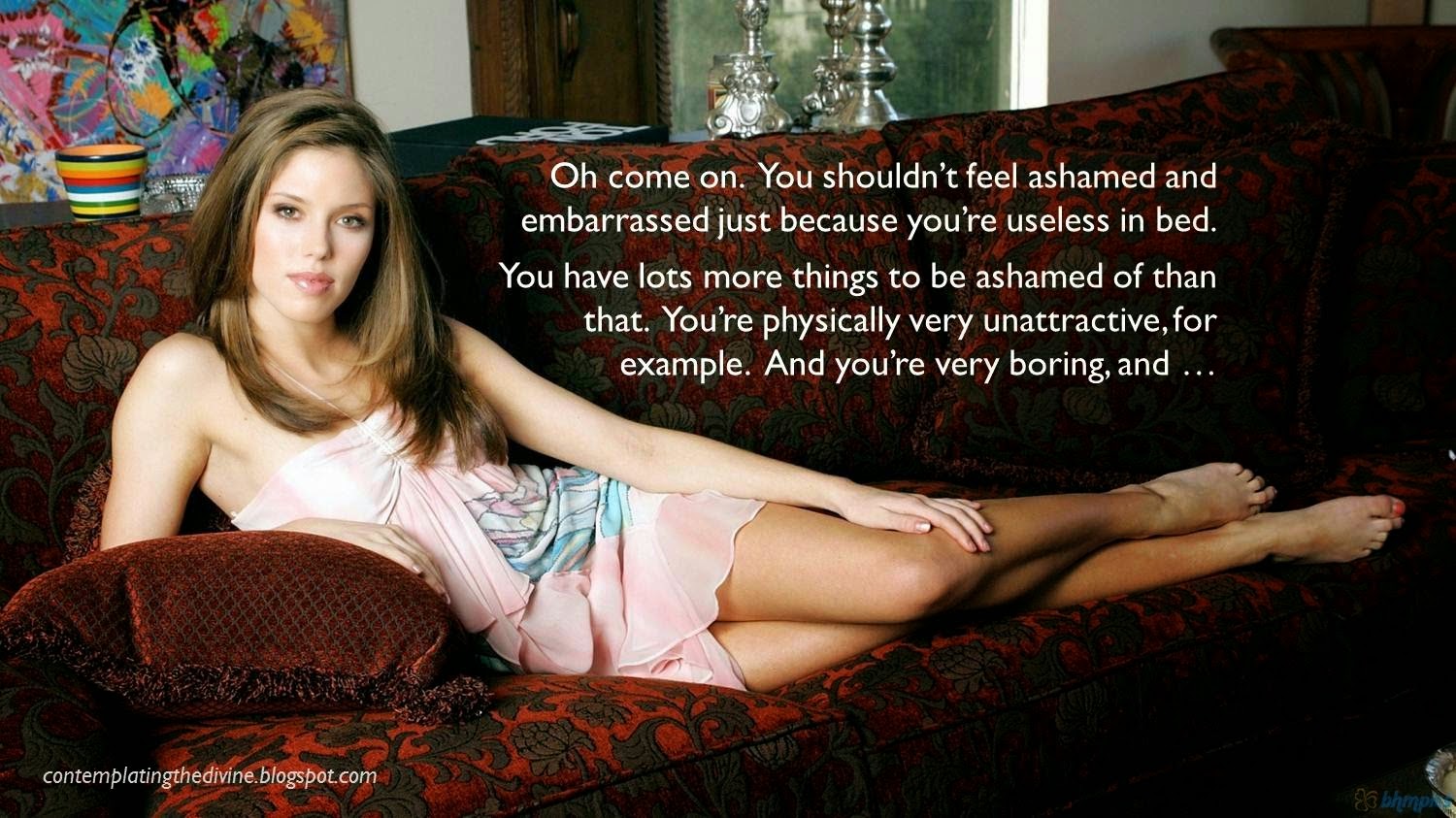