Recently we've had a guest over from Canada. Somewhat set in her ways, she's an old friend of Tilly's and we couldn't really say no. It's been... interesting. I was just ruing the fact that this was meaning even less physical connection, when combined with me going back to work and the later nights watching shiz on the DVDs that Tilly did with her, when Tilly ended up initiating full body hugs two nights ago. She ended up bona fide sleeping on me, but in a romantical sense. I was a little stunned, but pleasantly so.

However, it also brought out some of the frustrations physically. I can't dissipate them by dressing (the guest room is where my wardrobe is and now I'm likely to be in bed earlier than Tilly as she picks up book stuff missed whilst we were entertaining) and the opportunities to do it myself, always limited, are dwindling to naught. So it was that, in the bath this morning (we have no shower), I ended up thinking about the efficacy of buying something to... remove temptation? Basically, I have now seriously considered chastity devices but not as part of some sexual play, quite the opposite.

Not sure if they'd work, if I'm honest, but it may well be worth investing in.

Work continues to be good, if busy and not helped by the fact I know I'm being lazy about things, and my colleagues continue to be nice. My only concern is that, with our own office and facilities, we may end up being shut-ins! I managed to get some football in last Friday, which was much needed given my rotund stature, and this weekend I'm bobbing back to visit some ex-colleagues to exchange homebrews and have a night sampling city beers.


I also read an interesting take on transvestism from someone who claimed to have 'given it all up' after his mother found out. This through prayer and really wanting to because it was hurting his family and a selfish addiction. I really don't know what to make of it, on the one hand I can see in the story the same sort of feelings I remember being expressed by people who went to psychiatrists in the USA to be 'cured' of their homosexuality (and thus afterward repudiating it, when they came back to their senses) and, on the other, there's the definite playing of low self-esteem that probably needs a boost. It was... enlightening in its own way. I just keep coming back to the fact that of all the people I have spoken to in real life about my own cross-dressing, those connected most with the church have been the most caring and supportive without judgement. None of them have ever suggested that cross-dressing is a sin. It is to them I owe a great deal of my current view of what I do - that it is a huge part of who I am that I can no more deny than I deny the fact I read science fiction and enjoy films. Sure, I can cut either of those parts of me off, let them wither, but they'll just be holes where a part of me used to live and I would be poorer without them. 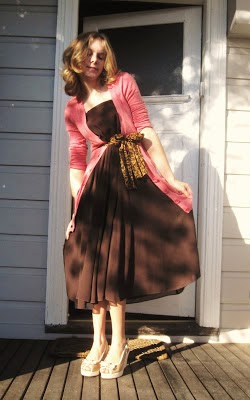