Tonight we are watching Fight Club because Tilly would like to see Ed Norton being strange in something and, let's face it, you don't get much stranger Ed Norton than you do when he's being the narrator of Fight Club. 'Course, you get Norton in stranger places than this film, like in Ang Lee's The Hulk for example but you can't really do much more odd than you get in Fight Club. I mean, sure, Helena Bonham Carter is very strange indeed at the best of times but, in this, just...

It's an odd background for a beer but it fits, I suppose. And, tonight, it's the turn of Greene King's St. Edmund's, a golden ale that claims that it is specially brewed to be served cool. Of course, I didn't cool it because that would require me to wait. I hate waiting for beer.

Is the subtext of the opening that the narrator has a thing for Marla Singer from the beginning, and she him? I recall watching this the first time and thinking that they hate each other. Looking now, I'm not so convinced. There are plenty of shifts where the twist is lampshaded in these sections and we're not introduced to Tyler Durden until long after Marla takes leave. 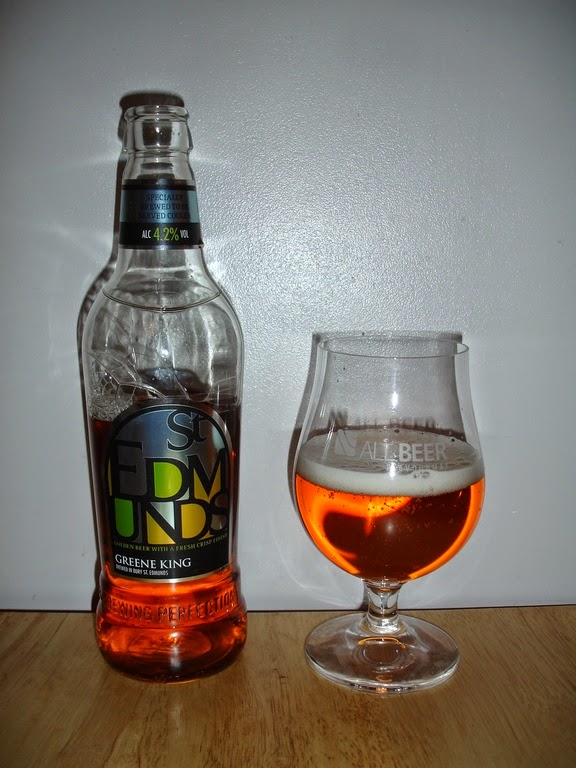 There is a massive amount of carbonation with this and, on opening, the whole bottle starts to fizz madly. This is probably due to the special brewing to make sure that it can be chilled - that way the carbonation would still be sufficient - and it does mean that careful pouring is necessary to avoid a similarly massive head. Head-tastrophe averted, the colour is very golden indeed, so congratulations to Greene King on successfully naming their ale. Mind you, it is on the light side of being golden, in the right light there is a deeper brown in there but the lack of deep malt is obvious once you settle down to an ambient light. The initial burst of bubbles also carries the aroma well, and that's where the malt seems to live. A tang of bittering hops, but nothing special, over the bed of just plain malt. Maybe a hint of yeast? Difficult to say for certain.

Despite only being 4.2% ABV, the first sip is almost as though it is a hard hitter. In fact, there's a strength of taste and punch that reminds one of Riggwelter but patently isn't. Despite being quite weak and easily overpowered by the hops the malt is rather nice. Not terribly adventurous, the hops and the malt are well-chosen and matched in power so that neither completely dominates, this is a mass produced ale that does exactly what it needs to and no more. On that score, this is sometimes all that you want to do. Slip on some comfortable shoes, underdress, and just nip on down to the shops for a pint of milk. St. Edmund's is the ale equivalent of that.

Oddly, this ale fits the milieu of Fight Club pretty well. There's something about watching a biting satire on consumer society enjoying a mass-produced product of our corporate overlords. Greene King put their IPA in a can, in a can! Anyway, this ale doesn't disappoint, there's plenty of body to it and no slack where the flavour isn't. Light malt means that it lacks something in depth and weight but the bittering hops make sure that the aftertaste doesn't become too thin. The opening of the aroma and the enhanced carbonation make sure that you get a proper taste on that sip too, again avoiding the sin of thin watery slack that can build if one isn't too careful. All of which means that this mass-produced ale is a nice little drinker.

Enjoy this pretty much any time, it's a simple little sessionable ale that doesn't pull any punches. There's nothing offensive here and it's even got an award (is there an ale that doesn't have an award these days?) so that can't be bad. Have a few of these on a weekend, enjoy the sunshine as it stretches into the late evening or hide from the rain as it closes in. You can even have this in Winter and it won't hate you for it. Then, when you're done, get some instant ramen and enjoy the fact that 12 pence worth of palm oil will destroy the world as effectively as your gut and not even interfere with the ale.