Sunny days are here again, the bees are in the breeze and the childrens are playing with play-dough or, rather, they were. Right now they're in bed. Yesterday was the turn of something I picked up cheap, because it was brewed for St. George's Day and that was a while ago now, and from a brewery I seem to enjoy. It is, of course, Dragonfire by the people at Shepherd Neame. It also marks the first ale that I had real trouble categorising in this new style blog - I went with amber even though the colour was a nuttier dark brown than that. Not ruby though.

We went out to a local park and suffered through the Girlie moaning and whining most of the way round. She did want to go, she wanted to play on her scooter, but something was off. So, we had to put up with some epic tantrums and basically trying to make us all feel miserable. When the Boy tried to play with her she would shout at him and scream if he got anywhere near her, cue askance from the Boy, and then she decided she wasn't moving without ice cream. I wouldn't mind, I would have supplied her with ice cream, but we had no money. This reasonable explanation got us nowhere so I tried shorck and awe shouting to be challenged by Tilly on doing what I glare at her for. In fairness, that much is true. Beer. 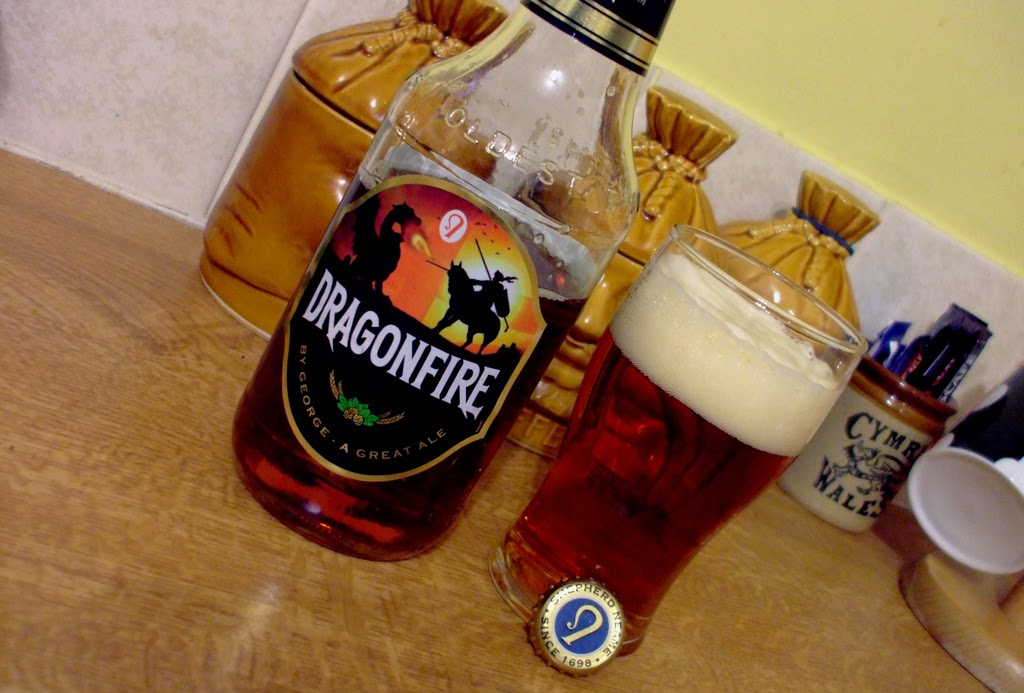 I know, I know, that image is a bit arty for this blog. Well, I can't claim credit for the image. My phone has been playing up. I stole this from the Google image search.

This one has a very malty nose, that is mellow and soft and snuggly. It fit the warmth of the afternoon, tempered by the welcome breeze, nicely and spoke of a dry and warm day. In fact, it was the smell of one afternoon spent in the park in Leeds back when I was still single and reading Half Blood Prince. Opening produced a satisfying 'snick' and the colouring was dark wood and very evocative. It says 'mahogany' on the bottle and, given how much it matched the wood stain of the fences, I think I can safely support that assertion. In pouring I was able to avoid the huge creamy head shown in the illustration, but it remained pretty decent. Creamy texture there, rather than froth, and there were spicy needles in the bubbles as I sucked in the aroma.

First taste is smooth and as light as you would expect from something that's 3.8% ABV, a solid sense about it like a well-respected local that has avoided the clutches of the pubcos and is pootling along nicely. In that sense it has a feeling of the pub in the first Life on Mars. First wave is definitely given over to the malt, closely accompanied and chaperoned by the Goldings hops, and then they swill together in the centre before a slight victory to the hops overall toward the end. A soft finish and an aftertaste that seems at odds with the dark colour, being neither bitter nor heavy, and much more reminiscent of a mild or pale ale. Indeed, repeated tasting of this did not diminish the overall feeling and let the whole flavour grow still better. I know it's from Kent and so has its issues but this is a reasonable ale that keeps good company and, despite being mass-produced, could actually serve as an antidote to Spitfire - though that's not all that bad either, to be fair!

Enjoy this in a garden, definitely, in the summer sunshine and with plenty of time on your hands. You may wish to have a second if the mood takes you and you may wish to accompany with summer foods such as salads and radishes and spinach. You could go the whole hog and roast something meaty but I suspect that this works better with something cold, maybe add some chicken pieces to that salad and make sure there's a good vinaigrette or house sauce to go with it. Sit on a bench, not a deck chair, and keep your shirt on - this ale does command some respect - then close your eyes and enjoy. Definitely starts well!