This was bought in a vain attempt to get into the selection of ales offered by my local supermarket. The area in which I now live is clearly more interested in cheap lager and strong tramp juice in cans. As a consequence, the bottled ale section is clearly maintained more out of a sense of duty than because people actually buy and enjoy ale. Tonight, therefore, I am trying Broadside from Adnam's. 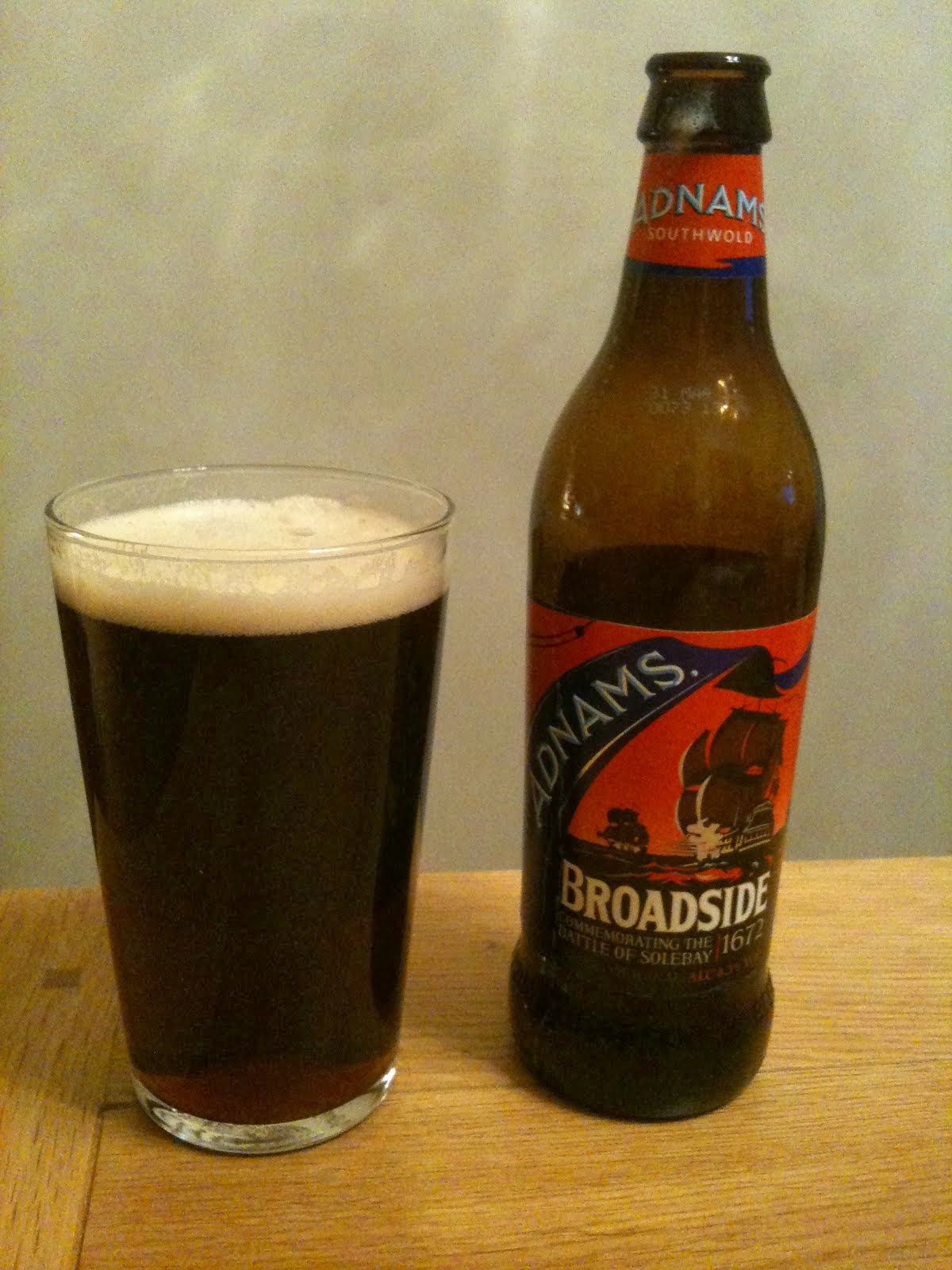 I have a vague recollection that I've tried this before. Way back, when I first started having beers on a week, I was particularly enamoured of blonde ales, Brewdog's Trashy Blonde to be precise, and I was wary of ruby ales. Indeed, heavy ales were very much not my forte as I was already needlessly concerned that having alcohol on an evening would render me unable to work effectively the day after and incapable of operating my car come morning. Aaaanyway, I had Doombar and Broadside and did not enjoy them. How green I was.

Sure enough, this is a ruby ale and it is a dark horse. It smells like malt and it smells heavy. After the overpowering hoppiness of Halcyon, this was actually a relief. The colour of it was heavy with promise and it put me in mind of some of the nicer ales I have had of late. At 6.4% ABV it was going to be a big hitter too and I was not disappointed. Aroma was musty, but in a malty rather than yeasty way, with hints of acidic hops as a good bitter should have. Taste was similar - a solid and dependable bitter in a way that I recall Black Sheep lost recently. It was malty in the middle and ended with bittering hops of a typical nature. I imagine that this goes down well on tap in dark bars at the end of a working day. It is a skilled laborer of an ale, with plenty of time spent down the pits and in the steel mills. It is the sort of ale that I can drink as a teacher and feel a connection to the working class.

Best drunk, as you would imagine, after a hard day's work. Despite the strength you can very much use this to session with as I suspect it is forgiving. The naval theme is well chosen and the overall feel is of the dark at the end of the day. Perhaps a poor choice for the latter part of spring it suits the ending of winter or the beginning of autumn more than it would summer or the cold depths of the icy blasts. Less stormy and more tall oaks, this is a very British ale. It compares well with my recent bouts but isn't the best, it's a workhorse of an ale and I'm glad I was tempted to try this again.