No special occasion but I was bored and I am getting depressed by marking. So, I plumbed to have a beer and I plumbed to have one of the ones that were gifted to me when I went Oop North because, well, why not? After some hemming and hawing I decided that I would go for the Jaipur because it was closest to my hand as I reached over the breakfast bar.

So, this would be my second try of something from the Thornbridge stable. At this point I am becoming increasingly aware of the fact that proper beer cannot be found in my local supermarket and so resigned to the fact that, sooner or later, I'll have to start ordering in crates of the stuff from proper breweries. Is this bad? It's probably a bad thing. 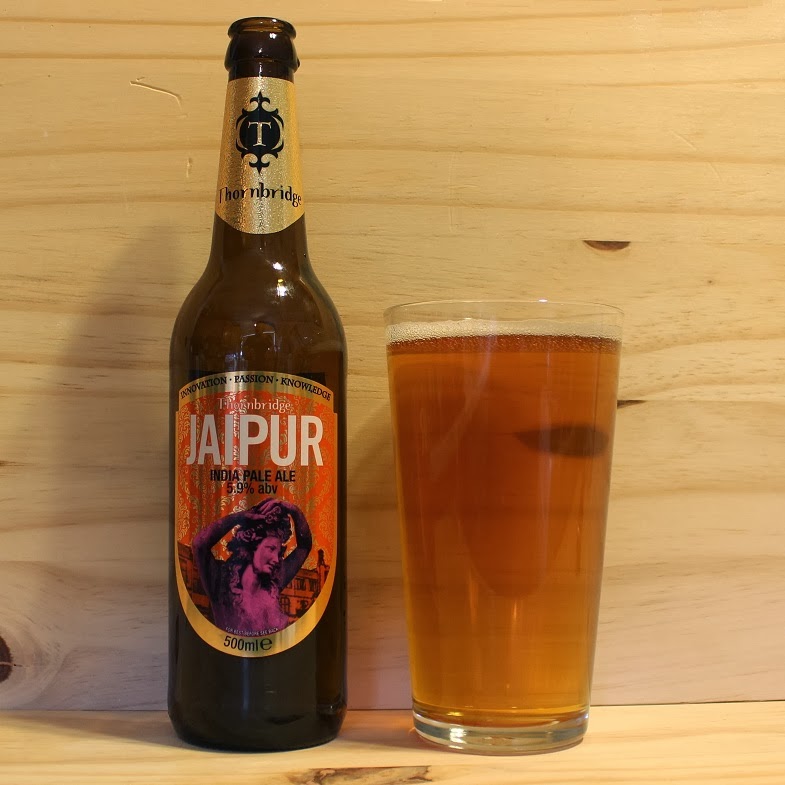 Opening this showed a brief hint of carbonation and the aroma hits you straight away. This is very hoppy - seriously fruity tang in the air that is both citrus and a host of blooming flavours, like a bouquet of fruit! It is very alluring. The colour on pouring is straw and mellow with it, bright and clean and cheerful. Plenty of fizz but the sort that reminds me of being bottle conditioned rather than artificially carbonated. Head is big, vigorous and bubbly - and it sticks around too. First taste does not disappoint - it promises much hoppiness and there are plenty of hops. Hordes of hops. I can see why it was so loved by the person that gave them to me and I can see why it is a nice ale all round.

As the sips continue it softens from a fairly harsh fizz with plenty of hops to a soft malt taste that works around the edges of that hops explosion and makes it slip down more easily. At 5.9% ABV this is no slouch and the taste is pleasingly in line with the punch. You aren't going to mistake this for something light and fluffy but nor are you going to call it firewater and never touch it. It is pleasant and helpful, as an ale ought to be, and wonderful at cleansing palates. I had had curry for tea, a packet sauce with pre-tandoori-ed chicken pieces, and the harshness of that meal was carefully and soothingly washed away by the tones of this proper straw IPA.

Enjoy this whenever you like, but most appropriately on a warm day with a good set of spicy food or a barbeque. Have a couple to hand in case you want to experience a second or, as I am forced to do, daydream about getting in a crate of this, in a selection of course, and having the time to really kick back and sample several in an evening. I would love to follow this up with another beer but know that if I do I shall regret it when I need to do more marking in the early morning and when I don't have another beer another week as a consequence.

It is definitely time I start ordering in crates. I am an alcoholic.