Drinks of an alcoholic nature


An odd one this evening as it doesn't really classify as beer (despite my tagging of it as such) and we're settling down to an episode of Sherlock, which you really ought to watch by the way. This is from the stable of Hooper's breweries who have form on this alcoholic versions of normal soft drinks. 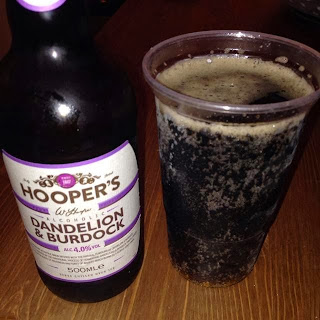 Onward! As claimed on the bottle it is indeed sparkling and it does indeed fizz like one would expect dandelion and burdock to fizz. No surprises there. Much like the hound, the gigantic hound, on Dartmoor this is coal black and smells like you'd expect. Definite hints of summer garden mingled with autumn burnt wood tang as you would expect from such a thing. Actually, it's a tad disappointing in terms of its taste given that it is 4% ABV and it is supposed to be more concentrated flavour than your standard soft drink version.

Still, it's pleasant enough fayre for an evening spent watching some overly clever TV with the wife. Not sure what else to add to this review, how bizarre that when reviewing things that aren't beer I have so much less to say. I think I just grew a beer gut with that admission.