Another blast from my youth here, but this time one that dates to my time in Sixth Form, when my cohorts would attend clubs with imaginative names like 'the Twisted Wheel' and 'the Front Page' and engage in under-age drinking and other such shenanigans. I am, of course, referring to the offering from Newcastle Breweries that is Newcastle Brown Ale, affectionately remembered as "Newky Brown" and the go-to drink of choice for people who called themselves such things as 'Kipper' and 'Greebo'.

Why tonight? Well, I thought that as I no longer have to drive to church on a Sunday morning (and the day has conspired to destroy any chance I have of doing any work) - the church is within walking distance - I'd have a beer and damn' well enjoy it. I have constructed furniture from IKEA, bought LED lightbulbs and nearly worn knickers but bottled it and plumbed for standard boxers instead. So, yes, from the comfort of a newly decorated living room (we added pictures, we haven't done painting or wallpapering or anything as energetic as that) I am drinking and reviewing a beer. 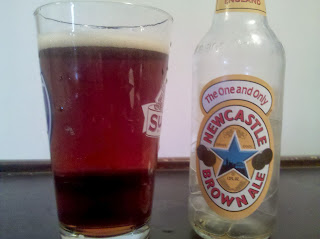 Opening it I was struck by the fact that the bottle is clear glass, meaning that the deep brown colour was provided entirely by the ale itself. Don't laugh, I genuinely hadn't really thought about it before, so I didn't know. Also, the lack of carbon dioxide smoke was a positive sign that this hasn't been too tainted by the mass-production and wide scale distribution of a staple beer. Aroma wise, there was a fruitiness to it, not as citrus-y as you expect from a well hopped beer but nor as deep and oaky as something with a bit more malt. It put me in mind of something like mouldering apples, dried orange or the kind of smell one associates with the whole foods aisle in a supermarket - you know, freshness with a nutty undertone. It poured well, making a froth for a head that reminds me of the one on Ruddles County in that it's not particularly strong or long lasting. Obviously sparkling and with a syrupy look to its progress.

At 4.7% ABV it's no slouch when it comes to strength and the taste reflects this though, surprisingly for something as ubiquitous as this, it doesn't taste cheap and nasty either. In fact, it was quite mellow, putting me in mind of Manchester Brown Ale, though I'll confess that the comparison has me thinking that the former does much better. It carries that fruity taste atop an obvious and strong malt, the source of the colour I suppose, and there's a much deeper section to that fruit. In fact, it is very similar in tone to those spiced drinks one gets warmed as samples in IKEA, so like that Glogg stuff. Actually quite nice. Over the top you get the standard yeasty spice and then, as an encore, there's the taster of something else, almost chocolate like in tone but very much more like the malt.

I have to say that I have been pleasantly surprised by this beer as I was expecting something a bit cheap and a bit nasty given how popular it was during my Sixth Form years, and how cheap it must therefore have been from the tap. Also, given the quantities I have seen this in whenever I pass the alcohol section of any supermarket, I was expecting something corporate and bland, without too much depth or any kind of genuine character. Whilst this doesn't match the likes of Ilkley Black for that or even get close to some of the nicer craft ales it does make the most of what it has and so I can now understand its popularity. Indeed, it has a touch of Old Peculiar about it (though that might make me unpopular in beer review circles, so I'm glad I'm not really in them). I can imagine this would go down well in the company of some friends all dressed to the nines in best dress finery or slouching in onesies without make-up. It is unassuming and, if you hit the bottle, you could pretend it was something rather special.

Enjoy this on an evening of relaxation, preferably autumn or spring, with a light meal and some company, the kind that prefers to mull things over rather than talk. Offer a few big thoughts, then inwardly digest them as you sup this ale. Consider the lightness of being, the hypocrisy  of Gandhi, the union of mankind and the perfidity of Albion. Then watch the footy and have a second as you yell sporting advice from your sofa. It's that kind of beer. But I like it.

I like it even more given the 'splosion of beer when I tried to get it into bottles, but that's a story for another time (if I remember to write it).