"Back in the saddle again"

I know, I know, starting with a song lyric is the last bastion of a scoundrel. Tonight I restart my reviewing of beers in a new place with new breweries. Apparently I now live in the brewery capital of the British Isles. This should help make up for the fact that I am farther from the coast than is possible anywhere else in England and thus the fish and chips are... well, they're not top notch. Tonight, therefore, I sample through the goodness and generosity of Tilly a local brew from Wollaton Breweries by the name of Green Tights. 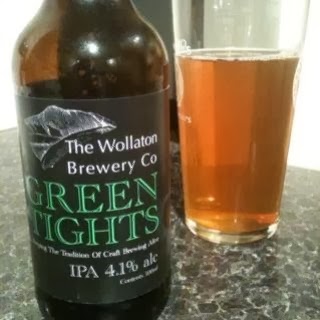 An expensive little brew but craftily done and in a small local brewery outside an old Elizabethan estate that we went to visit. It's an IPA with a 4.1% ABV and a lovely little squat bottle in which looks the part. On opening there wasn't much of a snick and the bottle warned rightly of sedimentation. I suspect I ought to have left it a little longer to condition (hark at me as a brewer). Anyway, nicely pale golden colour with an aroma that was nothing to write home about. Vigorous head that forms quickly and then froths a bit.

Taste is hoppy and lively with an element of citrus as one would expect. The bottle claims that it is crisp and it does not lie, this is one craft brewery that has delivered more than the one from Fountains (and it pains me to say that), and there's a depth to it. The bottle says 'biscuity' and I can't comment, but it is a bit flakier than a standard ale. It is very nice, very flavorsome, and very crafty.

I enjoyed it as an accompaniment to the watching of Sharpe's Enemy, a real blast from my youth and also one that I have never actually seen before. For this purpose the ale was well matched for it had that sort of body and zest that fits the musical overtones. As Sharpe was a bit of a bastard so is the beer in the fact that it masquerades as something less than it is, with the sediment and the lack of carbonation. No, this is a proper ale for sharing with men in snugs and with darts or snooker being played in the background. Enjoy it slowly, let it breathe and let it work its magic. It is a proper little beer from a proper little brewery. I have much to live up to.