The first day of the Ashes Test ought to have been very different from what it turned out to be. The pundits had been saying for days how the England side were so much more experienced and better prepared, the Aussies had suspended two of their players in the build up for minor infractions (going to a bar and missing a practice session respectively) and it looked like their team was the weakest yet. Botham had predicted a 10-0 series over the course of two Ashes Tests. The weather was hot and dry. The ground had no real swing and nothing to get the seamers into. England won the toss and went in to bat. By the end of the day they had been bowled out for 215 and the Aussies had put on a record breaking last man partnership where their newbie batsman managed 98 off 101 balls.

So I had Marston's Ashes Ale which proclaimed itself "not for Aussies" in solidarity with the English batting order's collapse on Wednesday. I had it chilled and out of the bottle and I had it with a curry. 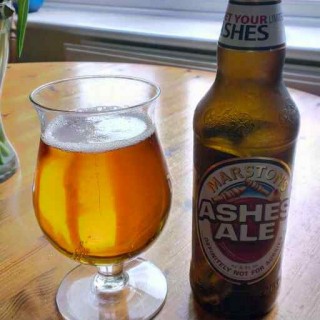 It says that it is a 'light drinking ale' and Marston's tend to be good at that sort of thing. The English Pale Ale I've previously had by them was a sharp and semi-creamy light beer that went well with a meal without making me tipsy. At 4.1% ABV this is in their light stable and the smell was pleasantly citrus laced. There was a feeling of summer about it, which is presumably why they've marketed it at the cricketing crowd. First taste was pretty much as I expected, no surprises, with an opening twinge of citrus followed by a pleasant fizz on the tongue and a little zest of yeast as it went down. It was nice enough, neither heavy nor light in the end and the chilled nature didn't seem to make much difference. I suspect that this would do well as a proper warm beer and that is a good thing for something that is aimed at people sitting in a warm cricket ground and lunch time picnics.

In that sense then, this is a clever little beer and will no doubt do well in the open air as we experience an actual summer with actual summer weather. The citrus tang is enough to make it a valid option to curb one's thirst and the relatively light ABV means that one can stand a brace without falling over and getting a headache. It is also liquid-y enough to avoid carpet mouth and the taste is subtle enough to enjoy its own but light enough not to dominate in a meal. I mean, granted, I had it with a speciality curry laced with enough tikka to turn the rice red, but it held its own well enough and was still enjoyable at the end.

Would I recommend taking it to see cricket? Well, yes, I would, but I suspect it would do well in most outdoor settings. So, enjoy this with the family at a picnic in some field. Maybe you've brought your own stumps and a bat and ball and will play some cricket, maybe you just like to sit under the trees near a river and listen to the bugs buzzing in the air, maybe you don't have children and want to enjoy this with your significant others. Maybe you're a student and want to enjoy it with friends. Take a brace, pack them in a hamper and don't be concerned about the warm weather, this is a beer that wants to be drunk in summer!
Posted by Joanna Cole at 3:30 pm