There's no real rhyme or reason to this one except to deliver on that promise I made to myself after failing at therapy around this time last year. Namely to get used to actually sharing and writing down the stuff that goes on in my head that even here, where my RL self is carefully obscured and hidden from most but those who watch PRISM closely enough, and therefore there is no fear of come back, I feel woefully underprepared to do.

I know that I have carefully set up this blog to be somewhere that doesn't really delve into the sort of thing that has people, men predominantly, browsing posts one-handed but, at the same time, I have tried to set up a place where I am free to be fully me. And part of me is my sexual side, I know that. I'm not sure everyone is the same, living with Tilly as long as I have has shown me that there are some people that are unable or unwilling to embrace or recognise a sexual side to themselves. Or, rather, Tilly is not at all comfortable with talking about or imagining sex with me. I have no idea if that is an emphasis on the last two words or the opening part of the sentence or both or neither, though obviously I assume the last two words for emphasis.

I also said that this sort of thing would be put safely behind a line break and so I shall make sure that this is the case. This particular one is very much based on a series of ideas I've had in a non-complete and non-linear fashion for many years. Once again, it relies heavily on my mad-ex with whom I had a six month relationship. Nearly ten years down the line and it still provides fuel...


I hadn't taken much convincing. "It looks good on you," she said softly and with a genuine smile, "Does it feel good?"

Meekly, I nodded. It did feel good.

"And here I thought you were only in it to show off your fantastic legs."

I had to admit that that particular compliment always made me smile, if I were the blushing type I would have blushed to hear it, as it was I simply smiled like an embarrassed teen and looked anywhere but at her face.

It was long. A full blue skirt that draped slightly on the ground, there was no question of me walking very far, if at all, in it without tripping up or getting the hem caught under my feet. But that was kind of the point, it was all about being silly. It was hers, of course, and she was slightly taller than me anyway. She'd never worn it, bought for her by a well-meaning relative who thought that she ought to be slimmer. Meant that I got it practically new. "I could hold it up?"

She laughed a little at that. "As much as I would love to see you try that, I was hoping to go for a bit more of a walk than that. Heels?"

She had a pair that fit me well enough, slightly too small, with a three inch heel. Of course I agreed. She lifted the hem and carefully placed each of my feet in the heels. Even with the extra height the skirt still draped a little, she smiled, "It looks like you may have to carry it a little bit anyway."

I was wearing a shirt on top. Blue stripes and short sleeved and very male compared to the skirt, but it didn't matter. Outside there was a summer heatwave and glorious sunshine, still hot and bright at this point in the evening. I almost didn't even feel self conscious.

"Are you sure I can't tempt you with any jewelry?"

She liked to push my limits. Somehow I was already wearing mascara; blue eye shadow; pastel blue nail varnish on my fingernails and black eye liner. I wanted to say no. She could tell.

"Oh, hold out your right wrist!"

I did. She took my hand and applied a small metal watch to it, tying it on with a large bow in blue ribbon that matched both the gypsy style skirt and the short sleeved shirt. "There," she announced, "much better. Now, let's go."

Holding hands like good friends we walked down the stairs, me feeling surprisingly un-self-conscious as I held part of the skirt up with my left hand, being led by my right. She opened the door and let me go ahead, "Ladies first," and then followed. It was exhilarating. The swish of the skirt against my bare legs was wonderful in the burning heat from the tarmac of the pavement, keeping my legs cool despite the high humidity and the heels made a noise on the floor that I loved. I could feel my feet being forced into position, the pull on my calves, and it was wonderful.

She kept a quick pace, that I struggled to maintain, having to take smaller steps than she was, and she knew it, but it was wonderful.

"Oh, you're welcome," she said and then we kissed.

I practically danced down to the end of the road, where there was the stile to the fields beyond, but found the going difficult over the dry and broken ground of the path in my heels. I had to use her hand to steady myself several times and my left hand was constantly in use rescuing the skirt from potential snags and tangles. And it was still wonderful. We reached a fence of metal railings by the woodland.

Smiling and giddy I nodded, "Yes, I would do anything for you." 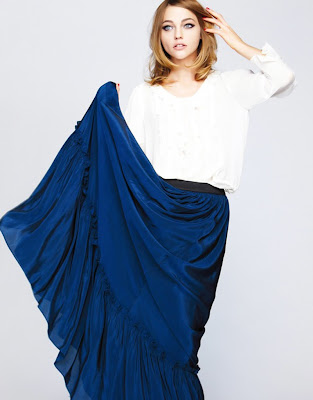 I did. I felt her take both my hands as she kissed me, she was holding something, and then I felt her place a bracelet around my right wrist, using both hands, and then heard a soft click, repeated. Her hands were removed, the kiss was ended and I moved to embrace her, only to find that my right wrist was restricted with a distinctive metal rattle. I opened my eyes in surprise and alarm, whilst at the same time I felt the thrill of excitement.

"Yes," she answered my unspoken question, "I shall be back in the morning. Oh, one other thing!"

Taking my unprotesting left hand she produced the ends of blue ribbon that had been hidden in the skirt, then she tied them around my wrist, meaning that I couldn't move beneath the skirt with that hand, the handcuffs prevented my right hand from the same action and also from reaching round far enough to free my wrist. "This makes sure you can't..." a quick grasp of my penis, already hard, through the skirt, "Um... misbehave, until I get back."

Experimentally I swirled the skirt with my left hand, trying hard not to think of my right hand at all.

Then she left.
Posted by Joanna Cole at 3:02 pm