The last time I had this beer I was on holiday with friends from University on an ill-fated trip to the Norfolk Broads. We stopped off in a pub on the outskirts of Yarmouth and had a couple of pints each, back then I was more into shots you understand, for the sole purpose of stealing some pint glasses. I remember thinking that the head was a bit like a skein of spittle but that was long before I understood that beers with a creamy head are not my type.

Anyway, yes, tonight I am mostly reviewing Ruddles County by, er, Ruddles brewery. I know, I am really running through the ales with odd breweries at the moment. 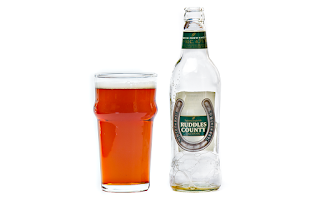 It is a pleasing chestnut colour in its clear glass bottle and smelled faintly of the fens - all wet and woody and rank with heavy matter and falls of rain. It has a crisp and clear citrus edge to a rather nice flavour too. There's definite elements of sweetness to it, it claims to have toffee and caramel but I can't say as I noticed any of that, and there is a reassuring thickness to the taste as it rolls over the tongue. Not too heavy and not so light that you end up wondering why you bothered. This is a good beer to share with a meal, it has that quality that is necessary in terms of being flavourful but without being too strong or weak. At 4.7% ABV it can stand some repetition as well. I can see why my friends chose it when we were drinking in Norfolk that time!

There is definite edge to the taste as well, which I like, and it seems as though it almost needs food to be eaten with it. So, a mealtime beer in the way that most of the ales that I choose are not.

Enjoy, and you will enjoy it, then with some close friends at any bar or pub you can find.  Have it with a nice meal that you will all like - steer clear of things like steak or chilli and, instead, have something that is filling and innocuous. Failing that, have it with a meal that requires you to be watching that flavour and taste like a hawk, because this is something that will reward that kind of attention. It is subtle and it is well made. It will not sneak up on you and it will not force you into warmth either. It is a beer that defies seasons and I suspect will work well in most times of the year.

The hops, incidentally, are Bramling Cross and taste not a little unlike Fuggles. We likey.
Posted by Joanna Cole at 2:55 pm