So, this was the second in a brace of beers that was bought for me by my childrens and it was an oddity. I have certainly not seen this on sale before and so it marks a real find by the Boy. Basically, the bottle has a large sun on it and it was bright and obvious enough that the Boy was able to pick it out of the line up. I'll take that.

What is it? Well, it is Roaring Meg from, um, the UK. Somewhere in Nottinghamshire from the looks of things on the bottle but no brewer's name. This could be a good sign I suppose, because they're obviously banking on the beer doing the talking rather than the brand. 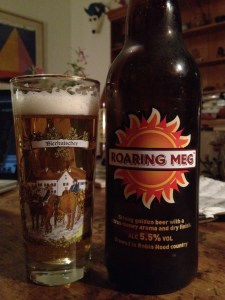 Anyway, it was an interesting bottle. So I expected an interesting beer, a blonde one by all accounts, but I couldn't tell you much about the colour - Tilly was having wine so I couldn't use the my normal beer swilling glass. Add to that the fact that pint glass is still mouldering in the bathroom as Tilly's back up bedtime drink glass (for water) and you see why. Enough of that, to the beer!  It smells a bit more malty than you would expect from a blonde and thus is heavier than it would suggest from the packaging. At 5.5% ABV I suppose you can expect some heavy hitting and some heavy nights. Certainly the punch it packs is larger than the other blondes of which I have partaken.

There's an element of citrus on the tongue and the carbonation is far from being overdone, though it is still fizzier than I like. The punch and the heavy maltiness is still there in the taste too, which was a tad off-putting, but I guess that's what the selling point is. Don't get me wrong, the malt doesn't detract from the beer too much and it's not a bad thing, just not what I've come to expect from blonde ales in general. I suppose, in this regard, it shares much with the Leffe Blonde  that started this whole thing way back when.

Basically, this is a summer beer, best enjoyed in the sunshine of a late summer's day after a hard day at work when you need to kick back and relax. Have with a light meal, I'm thinking fresh salads with crunchy veg, and simply enjoy the smooth taste and the heavy punch. It works as a winter beer, but it is obvious that this season is not its natural home.
Posted by Joanna Cole at 2:29 pm