Odd week, lazy morning, silly day and stupid moments.  Meeting with boss, suspicions confirmed, but a half day because on Monday we're in 'til gone 9pm.

It's time for beers.  I only have one, it's Spitfire. 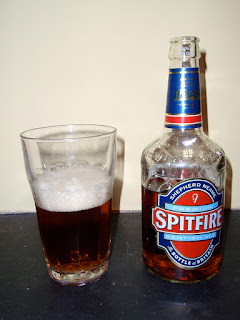 I don't know when it was that I started liking Kentish beer, it feels like I'm selling out in the bitter stakes - proper northern stuff, but it is nice anyway.  Claims to be a bitter but I don't get that.  The colour is lovely and dark, and the carbonation is at a nice level.  There is a crisp smell to it that avoids being musty and yeasty without becoming too malty and heavy.  It claims to be fruity but I'm not catching that as much as I've done with others.  At 4.5% ABV it's no slouch on the alcohol front and the taste lets you know.  Not hugely powerful or blow your head off strong but enough to remind you that it is alcoholic and you shouldn't have too many.

Overall, the taste is like the colour.  Elements of nuttiness with a definite spice edge.  After taste is not unpheasant but you'd have to be pretty gull-ible to assume it's the nicest bit to the beer.  Sorry, bird puns, I'm easily amusing and wren I get going I shan't grouse.  It was a good buy, not crowing about it, but I'm happy.  Sorry, I'll stop with the bird puns now, there's only so many you can do before you call fowl at it being owl-full.  Sorry.  So, yeah, it's not the strongest I've had but it has brought me a subtle light-headedness and has allowed my mood to lighten to the point where I'm making bird puns.  It is a beer.  A nice beer, not the best I've ever had and not as good as Thoroughbred Gold but good enough to get bought again.

Drink this wherever you like, with whoever you like and have a brace.  It's a beer that you can drink a few of and, if you're not an effeminate lightweight who worries colleagues that you'll break down and be upset if they make a joke at your expense, you'll be able to do so to quite a high level.  Not that I'm a bit bitter or anything.  And try hard not to think about how many you have, it'll depress you.  No, it's a drinking beer and good at what it does.  I'll probably buy it again.
Posted by Joanna Cole at 1:33 pm