I'd been looking for this one for a while, since I drank the Riggwelter and found, by accident, the Black Sheep home page.  In there I saw a reference to a Pal Ale that was done by the same people and, as I like Pale Ale, I thought I'd have to find it.  However, I'd never seen it in the shops.  Saw it a couple of days ago and bought it on a whim.

So, Golden Sheep it is tonight, and while I'm watching the 1930s version of All Quiet on the Western Front.  It is a good film, but not one I can show to my students, no way on earth they'd get the subtleties or the slow pace.  Anyway, beer. 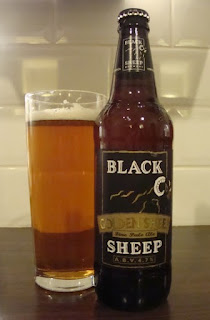 Sad to say that my first smell of the stuff was strangely reminiscent of sweaty socks.  No, really.  It soon resolved itself into a slightly 'hoppy' sort of smell.  No clever undercurrents, no clever little hints, just hops and a little spicy on the edges.  First sip was similar, don't know what I was expecting, but there was a hint of hop on the edges and a little yeast, mercifully light.  It was indeed light, as a pale ale should be and so, on a whim, I poured it into a glass.

The head was virtually non-existant, which is not a bad thing, but the carbonation was a little more insistent than the head merited, perhaps a little too much on the fizzy side.  The colour was good and golden though, a deep sort of honey colour, and the taste was nice enough.  It's no Thoroughbred Gold but it is a passable brew.  There's the hint of sweetness to it, I dunno, too much sugar?  But overall the taste was a satisfying one, not one that I would perhaps look forward to as much a second time, but that's not the fault of the beer.  At 4.7% ABV it is a strong-ish one but not so strong as will make you lose yours.  Ah!  Parmesan!  Yes.  In many ways, it's like the cheese - for years I thought that Parmesan was 'sweaty sock cheese' and thus avoided it in all its forms.  Then I tasted it in a proper meal and realised what I'd been missing.  This is the same, it's not a beer that will immediately appeal to anyone but it's good enough to drink.

Drink this in a brace, have a couple to get the taste, and drink it with a light meal.  I'd suggest lunch if you can.  It's a light taste and doesn't sit too heavily nor make you too drunk, so have it with a few sandwiches and a yoghurt.  Eat well, but not too much, then have the second pint.  It'll leave you mellow and with a good fuzziness in the brain pan.  It's not an ale to have on its own, its not one to savour, it's one to drink in the background.  Better than most but not the best I've had.
Posted by Joanna Cole at 2:09 pm