﻿
Usually when I talk fatherhood on here it is to complain and to say bad things.  Not so this time.  Yesterday was Tilly's madness.  She organised an event and there were lots of people there and, as is now pretty standard, that means that I look after our children.  I think we were both expecting the worst and as Catherine had agreed to help out we arranged for me and Tarquin to meet and share child keeping duties.

My boy was packed into the carrier and we set off on a walk that turned historical along some city walls before reaching our destination.  Tarquin was late and clearly the worse for wear - he was more tired than I think I've managed over the last few weeks and I'd had an energy drink.  The upshot was that I ended up in charge of all three children while he was ineffectual all around the edges.  But we had a great time.  I thoroughly enjoyed being with my children who, in turn, enjoyed the day.  We listened to a story-telling session, looked at exhibits in the museum (no, really) and played in the park.  Even the walk home, a little much for my daughter, was good on the city walls again.

When we returned to Tilly the children were tired but happy.  I'd go into more detail but they both napped today before I got back from work, meaning that neither of them are yet fully asleep and I've crashed from yesterday too.  I was going to have a beer, post here and finally start catching up on other peoples' blogs and such but no, instead, I'm sort of having an early night and posting briefly.

On Saturday evening I went alone to set up the hall for Tilly's event, mainly heavy lifting and tables and posters, and my only regret is tht I didn't take my rucksack.  There was no one else there, I was on my own for two whole hours.  I so could have worn my boots and my dress to do the work and it would have been lovely and relaxing and liberating.

Wednesday I have a ridiculous support meeting at work.  I'd rant about it but I am rather tired.  Of it and also generally.

Pants, I was going to write more.

All I have to say is go check out the work of Elle, it was a lovely surprise in the heat of working last week and a nice caption just generally.  She says it strayed from seriousness into silliness.  I'm not so convinced...

I wonder if I can find a way to have a walk and a beer while dressed?

Ah, really more tired than I had hoped, so I shall draw this rather short entry to a close.  Battles rage to decide which is dominant at the moment - happiness or worry - happiness because there are people who take the time to comment and say lovely things, and I seem to be doing good at work and home for a change, and worry because it's when things are going well that I mess things up the most.

I leave you with an image I stole from Limited Audience, I would love to change places for an hour or two, maybe a whole day.  I can't explain why but it would be liberating. 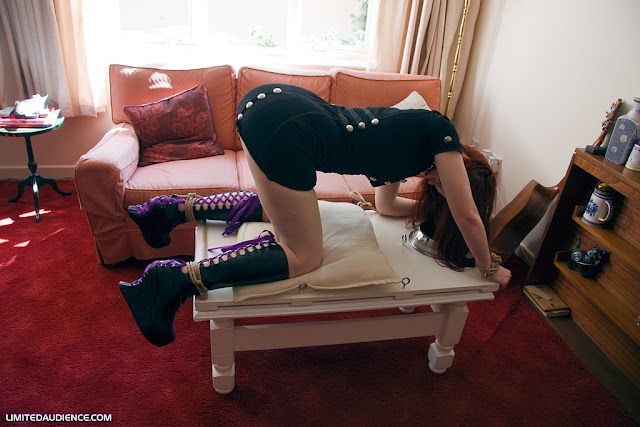