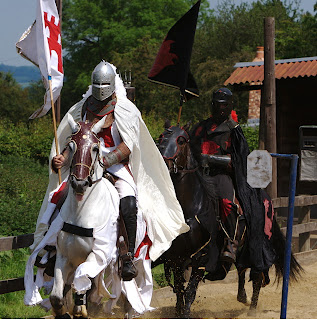 In the silence the sudden thud of hooves, heavy on the hard earth, was clear; slow and deliberate, the horse was being controlled and was unafraid. Pete found himself wondering how it had got so close without him being aware of it sooner, even if he wouldn't have been able to see anything because of the stupid hair, or who would be mad enough to ride a horse into an area with something as big as whatever was in the air around. A jingling noise, and the scrape of metal on metal multiple times at once accompanied the confident trot. A proper view of the source was still prevented by his hair but he caught a glimpse of silvery metal armour glinting and a large white charger moving through the bare branches of the undergrowth. There was also the tip of a painted wooden lance, metal point catching the light, in white and red coupled with an impression of a Saint George's cross in the Maltese fashion and sparkles of light that threatened temporary blindness from the corners of the armour. A knight in full battle regalia? Were it not for the fact that the entire scenario was ridiculous he would have dismissed it out of hand, now he wasn't so certain.
Then he saw it. 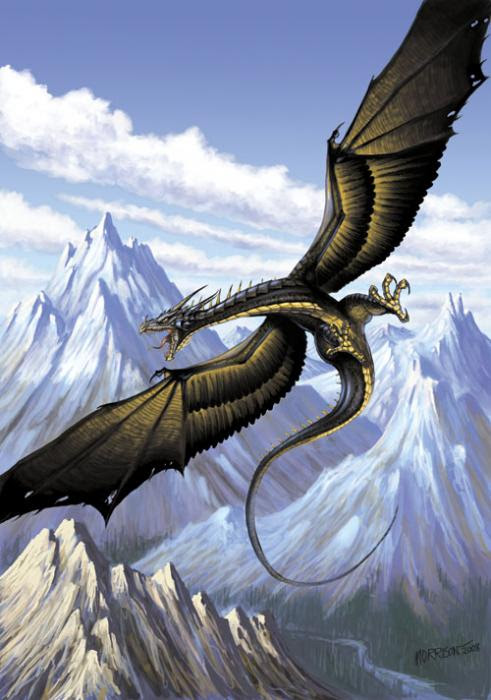 Brown and dark against the bright, but featureless, sky; its outline broken up by the bare hands grasping upwards from their earthbound prison, leafless and eldritch, hoping for salvation. An impression of impossibly large bat-like wings sweeping like a classical interpretation of a demon's flight and the stench of fire and death. The sweetness he had smelt before resolved itself in his mind: blood, rotting blood. Powerful legs with black obsidian claws curled like coiled springs beneath a toned underbelly and a long neck stretched out toward a pointed head that swept eyes slowly and carefully over the view below. Then it was gone once more.

With flight obviously not an option, and with wonderment at the fact that he had maintained control of his bladder, and with fight equally unlikely, Pete was surprised by the lack of fear he felt. Nor was it resignation that settled on him; rather, he found himself ruminating on the fact that, in all probability, he had seen, sort of, an actual real-life dragon. A creature that, as far as he was aware, could not scientifically exist was casually ignoring all known laws of evolution, physics and sensibility, not withstanding his own disbelief, and flying around like it owned the place. In fact, all Pete really thought was a faint sense of irritation that the impossible thing could be so arrogant as to exist in the face of all rational thought. That and the fact that his awareness of his bladder told him that he had been rather rash in not relieving himself during the night when no one was looking, now there was a dragon and a knight in attendance and he felt less obliged. Great, he thought, I'm facing certain death from a mythical creature whilst dressed and made up like the wrong gender in an era not my own and I'm looking for a urinal! 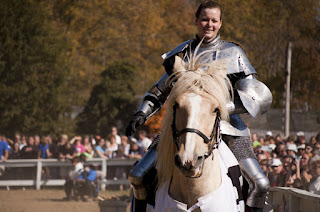 A quickened pounding of the hooves was felt, rather than heard, through the ground and his bare feet and he saw the sweep of the lance's tip to a charging position, heard the fall and lock of the helmet's visor followed by a throaty yell of a battle-cry without words. His hair still preventing a clear view of what happened next he heard the splintering of wood, a great animal roar mingled with the battle cry, and then there was a blast of uncomfortable heat followed by the prickly smell of smouldering wood and earth. A snap like a leather cloak unfurling cracked into a dull flap that generated a gust of air strong enough to blow the skirts of his dress between his legs and clear his vision in time to be blinded by the sudden winter sun as a great shadow shot into the air majestically but curiously ponderously given the speed. Grimacing, and squinting, he made out a human form in armour gingerly pushing back to a standing position against a hellish backdrop of flame and heat-wave. The thud of hooves informed him that the horse also lived and was running at speed somewhere, probably away from the fire. The figure bent to retrieve a sword and then readied themself for a fight.
Trying to catch sight of the dragon again, odd how the fantastic became entirely mundane in moments of high adrenaline, Pete stumbled and fell awkwardly to his knees, arms snapping up as the rope became taut. A gasp of pain escaped his lips as the bonds tightened on his wrists, the corset keeping him on the verge of being winded, and he sounded every bit like the frightened damsel in distress that he appeared.

Blinded by his hair again, eyes watering in pain, and trying ineffectually to stand again, Pete was completely confused and, frankly, nonplussed. There was a dragon, it breathed fire, and a bloody knight was babbling at him in a language that was mostly gibberish, though he caught the Latin for 'beautiful virgin', pulcher virgo, which he assumed would be best rendered as 'fair maiden'. Brilliant. "Well, bloody get on with it then!"

His unhelpful exhortation was, perhaps mercifully, lost in the sudden noise of the dragon's return and the blast of fire that came with it. Pete couldn't actually see this taking place but the heat that made him sweat spontaneously and caused him to worry that he might be immolated by his own stupid hair was pretty indicative. If the dragon operated by any actual rules of animal hunting then it would be reasonable to assume that the fire was not directed at the knight, that represented food and burning it to a crisp would be counterproductive, so the knight had a reasonably good chance or survival. A blurring of movement beyond the veil over his face, the clash of steel on bone ringing out and another throaty battle-cry mingling with an animal roar. Still the overpowering stench of rotting flesh and dead vegetation in waves and then the leathery snap and flap of another retreat.

Pete tried flicking his head to remove the hair, nearly lost his balance, regretted it through the pain in his neck, still couldn't see but at least stopped the pain in his wrists. He wanted to shout to the knight again, try and get some awareness of his plight and maybe get the knight to withdraw for his own safety, but the corset combined with his unexpected, if minimal, exertions to render him incapable of finding the required breath. Instead, breathing hard, he watched the knight ready his stance once again and swivel slightly to face a new threat. Did that armour have hips?

Another swoop by the dragon, from a new direction, and it was clear that the knight had inflicted some damage: the remains of the lance stuck out from the flank of the beast, just below the wing, and there were sword wounds on the thigh, oozing dark blood. This time Pete could see the attack more clearly. The dragon darted forward with its jaws, causing the knight to dodge; then the sword was brought in a double-handed slash to the neck, but missed and connected with the shoulder instead. The dragon roared in pain, grasping out with one of its legs that was pummelled with the pommel of the sword in turn, accompanied by the sickening crack of bone. Nevertheless the foot connected, claw scraped on metal like nails on a blackboard and the sheer force of the blow catapulted the knight upwards, before falling in a heap with a crash that must have been bruising. And the dragon took flight again.

"Get up!" Pete didn't know if he was issuing an order, pleading or just shouting like he was at a pantomime, but he did recognise that the knight was all that stood between his death and his survival. "It's coming round again!" Because the conversation so far shows he's going to understand me and is in desperate need of advice from a layperson, Pete thought sarcastically.

Sure enough, the knight was already standing and readying his sword once more. "Tu- You speak English?" And the knight was a woman. She shook her head, or the helmet moved at least, and then turned to face the dragon once more. This time she feinted right then withdrew almost as quickly, the dragon's head shot past and she had a clear view of its neck, which she hit with the point of the sword, rather than the blade, and drove it forward with all her weight. This time the attack was successful, and the dragon's legs hit earth, slowing its momentum enough that she was not swept off her feet and was even able to remove the sword. The dragon rose, like a drunk, and she was able to walk round to the head and drive her sword in a second time, this time through the skull. She left it there and stood back as the tail of the dragon whipped out in one last attack and caught her squarely on the head, sending her flying again.

It was the rope that pulled Pete back and forced him to the floor again, telling him that he had instinctively run forward to the knight's aid. The pain was worse, his wrists were tired of the punishment, but he didn't really care. However, his gasp of pain must have been loud enough because he saw movement from the crumpled armoured form near the dying dragon.

That's all I have time for tonight, obviously I'm breaking mid-paragraph, and getting images of people fighting dragons, or even getting ready to fight in full armour is really difficult.  However, I couldn't leave this without adding one of the images that imspired the tale, I really hoped I was going to get to this point tonight, but I haven't.  Getting Latinate/Olde English languages takes some research (I can't claim to have done much, but it did take some of the time I could have been using to flesh out my notes into prose!).  Anyway, below is the image and the dialogue I have in my head to go with it, maybe next time.