This is very much my blog, so don't be surprised if this doesn't follow accepted patterns and norms. Obviously it started out as a blog about my cross-dressing but it has developed a great deal since then. It is a place where I can be anonymous and honest, and I appreciate that.
It will deal with many things and new readers would do well to check out the New Readers' Page above this and the tag down there on the right. Although there's nothing too bad in here there will be adult language, so be careful. If you think this needs a greater control, please let me know. Thank you!

We have company from Belgium at the moment. The Boy's godmother who has gained the appellation "Goblin" from both our spawn, affectionately of course. Therefore there's a bit more beer flowing than normal and tonight I have been mostly drinking Timothy Taylor's Landlord which bills itself as a strong pale ale. The bottle, as you will see below, looks like it has been mostly unchanged since the 1960s and 70s, which, despite the fact I never lived through them, seems almost comforting. 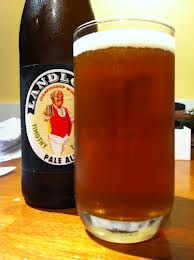 A good nose on this one reminds me of childhood pubs, about which I have spoken before when discussing Thwaites, and so immediately I felt at home with this ale. No whisp of CO2 as I opened the bottle beyond the satisfying snick of the cap coming off and so it won points right there. There is a slight hint of hoppiness in that nose that becomes all the clearer as it is poured out. Once there it has a chestnutty blonde colour that reminds me of the strawberry blondeness I equate with well dyed hair, along with a thin but persistent head that takes a short while to form and then remains languid as it slowly disappears.

First taste is smooth and malty with the hops doing the job of bittering very much in the background, which was nice and surprisingly so. At 4.1% ABV it fits nicely in with the other ales that are making up my current milieu and also has the effect of not making the alcohol overpowering. An uncomplicated taste with a lingering effect of hops rather than malt or yeast, which I applaud. It was being sampled along with some 'posh grub' (our official name for this) made up of chorizo fried and then put over beans, broccoli and pesto. It held out nicely against the strength of the sausage and also against the muzziness of the pesto. This was no mean feat and I've had ales before that fail this particular test. Sovereign, for example, and Goldings, both succumbed to the meal and became listless and background beers. Landlord does a better job of holding my attention and actually helped to clean the palate a little so that it increased my enjoyment of the meal.

Enjoy this with food then, of an evening or on a lunchbreak, and let the beer do its thing. Not one to neck back with any great pace nor is it one to fade away and become something to hold in your hand whilst debating meaty topics. It accompanies these well enough (and did with me) but you don't need them to enjoy it effectively.
Posted by Joanna Cale at 2:35 pm

Joanna Cale
I am interested in anonymity. I am white, christian, middle-class, employed, and thus an oppressive minority of the world's population. It's fun being in charge. I have three wonderful spaw- children, two of whom are confirmed ASD (as am I) and do enjoy most of what I do to get the monies in. I love food, in great quantities; lovely pictures; a good ale and an evening being flighty and enjoying beautiful things. Indulging is rare but can include baths (I prefer a ridiculously long shower to be honest) and good TV. I like to think I am a Feminist.